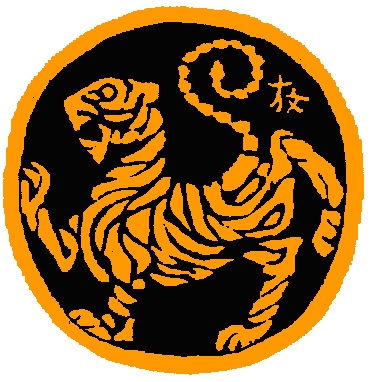 Hoan Kosugi, a famous artist in Japan, along with Jigoro Kano, was the most influential person in encouraging Funakoshi to teach in Japan in 1922. As part of his enticement of Funakoshi, Hoan Kosugi told Funakoshi that if he wrote a book about karate, he, Kosugi, would design it and provide a painting for its cover. When Funakoshi produced the book, Kosugi produced the now famous Shotokan tiger.

Kosugi’s idea for the tiger came from the expression “Tora no maki” which, in Japanese tradition, is the official written document of an art or system, used as the definitive source for the particular art. Since no books had ever been written about karate, Hoan Kosugi told Funakoshi that his book was the tora no maki of karate. Since tora is also the pronunciation of the kanji for tiger, he designed the tiger in a clever play on words, as a representation of Funakoshi’s art.